"Beware the ViRUSES!" is the fifth episode of the pilot season of CRiTORA. It was released on February 17th, 2021.

The ViRUSES go after the CRiTORA and try to infect Spottie and company, to which their company attempt to disinfect.

In ViRUTE Bay, the ViRUSES argue over a toy they were playing with until Queen ViRUS hears the ruckus, snaps them out of it and tells them that they should work together and not argue. Unsuccessful, the ViRUSES continue to argue. Queen ViRUS decides to whistle to send ViRAL Pup and break up the argument. She gives the ViRUSES their first mission: to infect one CRiTORA but if they fail, they will be banished from CRiTOPiA and ViRUTE Bay respectively. V-A agrees and the Queen demands them to go to CRiTOPiA and infect the CRiTORA.

Meanwhile in CRiTOPiA, Spottie tells her friends that Eggy showed her, Dashie and Avery his robot yesterday, which wows Coneboy, Big G and the Bitz Twins. During the conversation, Eggy leaves the group. Avery asks where he's going, only for Spottie to tell her that he has to head home to check on his robot. The ViRUSES watch and follow his path as he goes home. At home, Eggy goes to his nearly-completed robot and disinfects it, so that it doesn't get infected by a ViRUS. All of a sudden, the ViRUSES break in to his house, which angers Eggy instantly. He tries to attack but is infected by one of the ViRUSES and becomes V-Eggy.

Back outside, the rest of the main group are waiting for Eggy to come back. Bunsen checks his watch and wonders why Eggy's taking a long time. Big G takes a close view at his house and realizes that something's going on inside. Spottie, then, says that they should investigate and see what has happened at Eggy's house. A Cursor LiFEFORM shows up and transports the main characters to Eggy's house, but Coneboy doesn't feel safe there, with Nuzzie getting the feeling that a ViRUS might be somewhere around this area. Spottie gives her friends advice that if they remain calm, they'll find Eggy and make sure that everything is fine. Unaware that Eggy has been infected, she turns around and realizes that he's been infected and runs off. The rest of the main CRiTORA run off, except for Big G who gets attacked and infected by V-Eggy.

The remaining five hide behind a bush where they wouldn't get infected by V-Eggy. Coneboy begins to think about how to turn Eggy back to normal, only for Spottie, Avery, Nuzzie and Bunsen to tell him that there's a disinfectant spray that helps turn an infected CRiTORA back to normal and instantly delete a ViRUS. However, one of the ViRUSES pop out from behind and infects Bunsen. The four flee in fear until they are stopped by V-Big G. Coneboy and Nuzzie decide to fight while Avery just stands in place and claims in fear that they'll never defeat Big G. Unfortunately, V-C jumps on and attacks her, infecting her as well. Soon, Spottie decides to get the disinfectant spray from Eggy's house before she gets infected. In the middle of the battle, Coneboy is still trying to fight Big G until V-Nuzzie shows up and proceeds to attack him. He, too, gets infected.

Spottie is the last CRiTORA of her group who is not infected by any of the ViRUSES nor the infected members and is being chased by the infected CRiTORA. She spots Eggy's house so she runs inside and grabs the disinfectant spray, but manages to protect the robot. Just as she picks it up, V-Eggy shows up in front of her, but is disinfected and turned back to normal. Soon, the rest of the infected CRiTORA are disinfected and reverted back to normal. Spottie feels happy that she saved her friends from the ViRUSES. Then, Nuzzie asks her if Eggy's robot is fine, she says that she made sure it didn't get destroyed.

Back at ViRUTE Bay, Queen ViRUS and ViRAL Pup are upset to hear that the CRiTORA they were supposed to infect have been disinfected. Queen ViRUS tells her minions that they should of delete the disinfection spray first and then, infect the CRiTORA. Then, ViRAL Pup tells her that "there's no next time" for the ViRUSES, so Queen ViRUS decides to punish her minions by banishing them from ViRUTE Bay. Now, she has to come up with another plan that might work better than the last, which ViRAL Pup will help out with, so they run to the planning room and come up with their second plan. 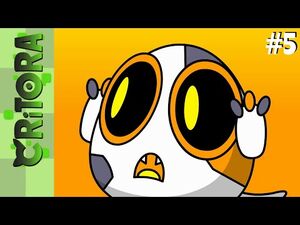