Dawn of the Nameless

"Dawn of the Nameless"

A mysterious robot has appeared in CRiTOPiA, and Spottie, Avery, and Coneboy try to figure out what was up with them.

The episode starts with Eggy exiting from his house for some fresh air. His attention is caught by Spottie Leonard when she invites him to see a mysterious place she and her friends found, so he catches up with his friends. Meanwhile, [no name] teleports out of Eggy's house and decides to go check out the outside world, much to his curiosity. Eggy eventually joins Spottie along with her friends Coneboy Golliday and Avery Darling to discover a clubhouse in the middle of the Meetup District and claim it as their own property.

Once they enter the clubhouse, they realize how weird and huge it is on the inside, but they decide to make the clubhouse nicer than it is now. Back outside, [no name] discovers the clubhouse and might as well, check it out. As the clubhouse is being decorated with furniture and personal belongings, the mains become startled by the presence of [no name] trying to get inside the clubhouse until they finally appear in front of the Mains. Shocked, the kids learn that Eggy had recently finished making the question mark-shaped robot and Eggy seems proud of it. He offers them a handshake, but they accidentally save him in their inventory and disappears out of sight, shocking the rest of the Mains. Now, they need to search for the robot and their creator, so they come up with some techniques that would help make the search more interesting.

After the plan was done, the trio heads out of the clubhouse and into CRiTOPiA to find [no name] with their respective techniques: Spottie and her buggy, Avery and her plane and Coneboy with his stick figures. Chaos ensues when [no name] begins to wreak some havoc around CRiTOPiA. First, they turn a tree into a bowl of ice cream, distracting Spottie in the process. Secondly, they evade Avery's capture by riding a similar, but smaller and much faster plane, much to the surprise of some bystanders and last but not least, they turn Coneboy's stick figures into animation files before disappearing out of sight again. Now that they're unable to find Eggy and [no name], they must rest at the clubhouse before they have to search again. Meanwhile, a V-SPY ViRUS appears and collects some information from the robot Abnormal CRiTORA. 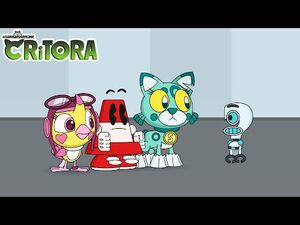