Spottie, Avery, and Dashie challenge themselves to a race before a dangerous lag storm suddenly arrives.

The day in CRiTOPiA starts normally as Spottie strolls through CRiTOPiA Park. Dashie shows up and asks Spottie for a race, which she declines and causes Dashie to go desperate for Spottie to participate. Spottie accepts it, but Avery hears the discussion and willfully accepts Dashie's request. The girls prepare for the race and then, take off, except for Spottie. Thanks to her laziness, she decides to quit the race and have a nap underneath a nearby tree.

In the middle of her nap, she hears someone fall on the ground and discovers that it was Potato Chipcheek. She asks if he's alright, only for Potato to say he feels fine. However, he starts to lag repeatedly as he tries to explain to Spottie on what he did. The sky becomes dark and thunder ravages through the park. It turns out to be a lag storm! In the middle of the race, Dashie begins to lag as Avery watches in shock, she then starts to lag as well.

As the storm worsens, Spottie and a few more CRiTORA suffer the same problem as well. Dashie and Avery called off their race and hide beneath a tree where they wouldn't be struck by lightning. Avery explains to Dashie what has happened over the past few days from a CRiTORA Overload to some CRiTORA trashing the Art District with chairs. Spottie then finds and runs to them and is relieved that they're safe. Avery spots a house, which happens to be Eggy's, so they run inside.

The girls thank Eggy for letting them enter his house. He then shows off his project which wows Dashie, Spottie, and Avery. They figure out that it will be a robot, thanks to Eggy saving one of Coneboy's folders the past two days. All of a sudden, the lag storm disappears and the girls are now ready to head out again. Spottie says goodbye to Eggy before heading outside with Dashie and Avery. Outside at the park, Dashie asks Avery if she could continue the race, only for Avery to call it a day. Soon, Spottie asks what damage was caused by the lag storm. Meanwhile, Placeholder shows up and escapes from out of the hole where the lightning struck. 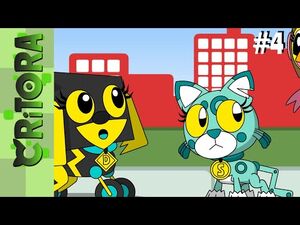