The Bitz Twins (Bunsen and Nuzzie) both teach Coneboy how to save, copy and delete, to which he uses to his ability.

Coneboy is planning on an art project that requires animation, but is unsure of what to paint. He checks inside his closet to see if there's any paint, only to find out that there's no paint left. Frustrated, he decides to ask Zippy to borrow some of his paint, but is interrupted by someone knocking on his door. Since Spottie and Avery were not invited to Coneboy's house like last time, he decides to answer the door for himself, but doesn't get the chance when Bunsen and Nuzzie arrive at his house.

The Bitz Twins ask Coneboy to come for a teaching. Outside of CRiTOPiA, Bunsen shows Coneboy what CRiTORA do when it comes to finding objects: Save, Delete and Copy. At their house, they teach him how to demonstrate copying, deleting or saving a wrench. Coneboy manages to copy a wrench successfully. Impressed, he tells the Bitz Twins that he'll be heading to the Art District to meet Zippy, so that he can borrow his paint.

As Coneboy enters the Art District, he sees the place trashed with multiple chairs. Zippy comes rushing to Coneboy, telling him that Nonsense was taught how to save, delete and copy just like Coneboy and the rest of the CRiTORA. It turns out that Nonsense had been trashing the Art District with chairs and claiming himself to be the "king of chairs." Without further ado, Coneboy manages to show Zippy how to delete an item before deleting all the chairs from the Art District. Zippy thanks Coneboy for cleaning up the Art District from becoming a land of chairs. Then, Coneboy asks if he could borrow his paint for his animation project, only for Zippy to tell that he already gave his supplies to Eggy for his own project, leaving Coneboy in dismay. 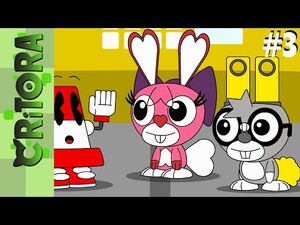