"Sky-Flying Frenzy" is the third episode of the first season of CRiTORA. It was released on November 15, 2021.

Ming-Ming Light and Goldie Midas try to look for new friends and end up meeting [no name].

The episode opens up with Ming-Ming Light and Goldie Midas taking a stroll through CRiTOPiA's Meetup District, looking for new friends to greet. Goldie hopes that there won't be any ViRUSES lurking around today, which scares her best friend because of the fact they've been recently invading the city. Aside from that, the girls head off to find some friends to talk to.

Meanwhile at a cafe, Designless is about to eat a cupcake he ordered but before he could eat it, Stuart comes along and eats his cupcake, angering Designless, and flies away. Upon the search for new friends, [no name] appears in front of the girls. They greet them and ask what their name is, but [no name] still doesn't know, and then teleports away. Since Goldie n' Ming-Ming have never seen [no name] before, they decide to go and find him. Ming-Ming takes out a telescope to get a better view, but couldn't find any signs of the robot. Goldie worries about ViRUSES being around somewhere in the Meetup District, which, again, scares Ming-Ming and asks her friends not to mention it.

Back at the cafe, Designless has now ordered three cupcakes but is distracted by a telescope dropped by Ming-Ming. While he observes the telescope, Stuart comes back and eats all three cupcakes from his plate. Designless gets mad at him and asks him why he keeps eating his cupcakes, only for Stuart to reply that they taste good. Going back to the girls, the search for [no name] is starting to become exhausting for Ming-Ming, but Goldie knows a friend they can ride with. She calls for her friend and that friend turns out to be Cloud! The girls ask him if he knows where [no name] could be and Cloud whistles in response, so they go off to find the robot.

[no name] appears in another area in the Meetup District where a V-D ViRUS is standing. They spot the ViRUS and teleports away before it could infect them. Going back to the cafe, Designless and Stuart go into an argument as Stuart tries to tell Designless that he could paint cupcakes to life without having to bake them since he is said to be poor at cooking. During the argument, a ViRUS goes after the CRiTORA while Designless leaves the cafe for his life and Stuart falls victim to the ViRUS and gets infected.

In another part of the Meetup District, the girls and Cloud find the now-infected Stuart right on their tail and get chased all throughout the district. [no name] arrives at the scene, but the V-D ViRUS follows their path. Before it could infect the robot, [no name] fires a rocket at the ViRUS, deleting it instantly. They get an idea on how to use it, so they fire their rocket from behind and disinfects Stuart. It seems like [no name]'s rockets can also disinfect V-CRiTORA! The girls ask [no name] if they want to do puzzles together, which they accept while Stuart decides to paint some cupcakes for Designless, ending the episode. 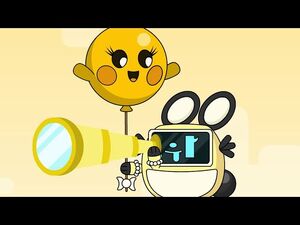