On a snowy day in the Meetup District, Spottie, Avery, and Coneboy all have a snow fight, not aware of a threating situation.

It's snowing in the Meetup District's CRiTOPiA Park and the main CRiTORA are having a ball in the snow. Spottie has built a fort so that she'll be safe from any incoming snow objects. However, Avery decides to throw a snowball at her fort, but is, then, hit by a much larger snowball which, in turn, was created by Coneboy. He gets struck by a snowball much bigger than his and it turns out that Spottie could also make giant snowballs, not just Coneboy. Shortly after, an anvil made of snow crushes one of the fort's walls and we now see that Coneboy can sculpt existing objects out of snow, not just simple shapes. Then, he gets hit by multiple small-size snowballs. As the fight progresses, Spottie and Avery proceed to sculpt more things out of snow. Avery has sculpted a plane out of snow while Spottie has built a giant cat-like robot. Soon, she wants to make the snowball fight even more intense. Coneboy agrees with the plan.

Meanwhile, Erniejoe Freckler is trying to lift a tree stump with all his strength, but is unable to due to the tree stump being a lot heavier than him. All of a sudden, a snowball strikes him in the face, interrupting his routine and infuriating him at the same time. He threatens to play rough on anyone who threw the snowball at him before resuming to his workout. Halfway through his workout, a snow anvil falls on top of Erniejoe, knocking him out. Coneboy rushes to the scene and tells him that his anvil was going to hit Avery's snow plane, but went for Erniejoe instead. After that, he hurries back to his friends to continue the snowball fight, but is buried by the pile of snow ejected by Avery's snow plane.

While Avery is flying her plane, Spottie jumps up from behind holding the same big snowball from earlier, causing her to abandon the plane and fly away. Spottie manages to destroy the plane with the snowball, disintegrating it into a pile of snow. When the fight is over, Avery asks who won the game, only for Coneboy to reply that it wouldn't be him before a pile of snow falls from the sky and, again, buries him. All of a sudden, a purple cloud appears out of nowhere and it turns out that an Abnormal CRiTORA, named Quirko, has arrived at the CRiTOPiA Park. The main CRiTORA greet him after his arrival at the park. After that, Quirko asks the main CRiTORA if they want to see what he can do, Spottie accepts his request, so he proceeds to show the main CRiTORA one of his abilities, and in that case... it's shapeshifting! The main CRiTORA give an applause for Quirko, but now he has to leave CRiTOPiA and promises that he'll be back soon and then, off, he disappears! Before resuming to the snowball fight, the main CRiTORA comment that they never saw Quirko before, but his ability seems cool and hope that he'll take on even more different forms when he comes back.

Awoken from being knocked out, Erniejoe resumes to lifting a tree stump one last time before finally giving up and deciding to delete the tree stump. Unknowingly, however, a V-B ViRUS appears where the tree stump once stood and attacks Erniejoe, infecting him in the process. Meanwhile, a second snow fight is starting. Spottie has built a snow castle while Coneboy has built a snow hammer but as he swings the hammer, V-Erniejoe appears and gets smashed by Coneboy's hammer, deleting it instantly. As Coneboy was about to apologize Erniejoe for smashing him with his snow hammer, he realizes that he's infected and seeks safety on top of Spottie's snow castle. Avery tries to save him, but her plane won't work, so she also seeks shelter up on the castle. As soon as the main CRiTORA are on the castle, V-Erniejoe has followed their path and continues to chase them. During the chase, Quirko reappears, this time in the form of a DiSiNFECTiON Spray Bottle, and disinfects Erniejoe, only to be startled a bit by the Toy District CRiTORA's size; He quickly greets him before disappearing again. After that, Erniejoe comments that Quirko is, of course, strange like him before suddenly realizing what he's supposed to be and in turn, runs off to look for answers.

Baffled, Spottie and her friends never knew that Quirko could also turn into a bottle of DiSiNFECTiON Spray. Other than shapeshifting, not much information is known about Quirko, nor even where he lives. But now that the snowball fight is over, Spottie, Coneboy and Avery decide to leave CRiTOPiA Park and head home as the episode ends. 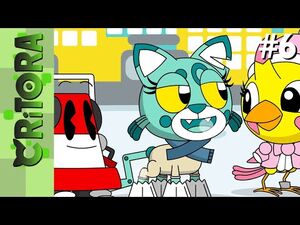