The CRiTORA take a trip to a giant trash can in the ground to throw away some of Coneboy's junk files.

Coneboy has just finished cleaning up his room, but Spottie asks him if he cleaned his closet, which he forgot to do. As he checks on his closet, he finds loads of unused files. Avery asks why there's so many files in his closet, then Coneboy claims that he was going to use them at some point, but never got to it. Soon, the trio hears someone knocking on the door.

After racing through the house to answer the door, they find Eggy, who had arrived outside of Coneboy's house, and the trio asks why he came here. Eggy points to the Industrial District's giant trashcan hole as he found out that Coneboy needs to throw away his files. The group manages to bring the files along as they follow Eggy to the designated area.

Meanwhile, Chum Buckebin complains about his job when he finds the four young CRiTORA bringing files along to throw away. He then tells them it's a dangerous area. He tells the group that anything that falls in the trash can will be gone forever. After hearing the dangers of using the trash can, the group safely manages to proceed. Worried, Chum decides to find help in case if a CRiTORA falls into the trash can. Big G suddenly arrives and is here to help, but Chum claims that he needs more help than just one CRiTORA.

The main CRiTORA have arrived at the trash can hole and Eggy goes first to throw away one of the files as Spottie and Avery watch. Soon, the three other CRiTORA join and throw away files as well. Soon, Eggy becomes last to throw away the last junk file, but trips over a rock and falls inside the hole. Spottie, Avery and Coneboy follow him as well as they try to save him before it's too late.

They form a small chain of themselves as they fall in. Spottie catches Eggy by holding onto the file Eggy was going to throw away, but Coneboy loses his grip on the pipe and continue to fall until they're caught by Chum Buckebin and several more CRiTORA, also forming the same chain the main three formed earlier. They're pulled out by Big G until CRiTOPiA's system crashes, ending the episode. 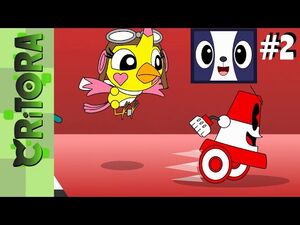